The exhibition title Arctic Visions: ‘Away then Floats the Ice-Island’ was drawn from the text of a core artifact in this exhibition, William Bradford’s elephant folio entitled The Arctic Regions: Illustrated with Photographs Taken on an Art Expedition. (New Bedford Whaling Museum Arctic Visions Exhibition dates: April 2013 – October  2014)

Published in London in 1873, principally sponsored by Queen Victoria, an estimated 300 volumes were printed. Three are owned locally, one here at the New Bedford Whaling Museum, one belonging to the Millicent Library in Fairhaven, and one at the New Bedford Free Public Library.

This exhibition, using the rich Arctic and ethnographic collections of this Museum and through partnerships with other institutions and individuals,  explored the intersections between art, science and exploration.

On display were a variety of Bradford’s works, ranging from sketches, drawings, and some of his most well-known paintings, to the original Arctic Regions and its digital facsimile. The diverse media represented clearly demonstrated the depth and strength of the Museum’s Bradford holdings, and also reflected the generos­ity of numerous donors and lenders to it.

Bradford’s book recounts a three-month journey along the Western coast of Greenland aboard the Panther; a 325-ton sealing ship. Departing from St. John’s Newfoundland on July 3, 1869, the voyage was organized by Fairhaven artist William Bradford (1823-1892) solely for “purposes of art.” Accompanying him were distinguished Arctic explorer Dr. Isaac Israel Hayes and skilled photographers John L. Dunmore and George Critcherson. The voyage was commanded by Captain John Bartlett aided by his two brothers as officers and a “crew of hardy Newfoundlanders.” Unlike earlier Arctic journeys set on discovering the Northwest Passage, or undertaken for commercial profit, national prestige, or scientific curiosity, Bradford journeyed for art with sketchpad in hand.

Wet plate collodion photography at this time was relatively new and difficult to execute, especially in extreme Arctic conditions. As Douglas Wamsley and William Barr state in their essay, Early Photographers of the Canadian Arctic and Greenland, other amateur photogra­phers had successfully photographed the Arctic, including explorer and physician Isaac Israel Hayes. An honored companion aboard the Panther, Dr. Hayes had previously traveled to the Arctic on multiple occasions, including once with Elisha Kent Kane on the Second Grinnell Expedition in search of Sir John Franklin. By com­parison, however, Dunmore and Critcherson’s photographic output surpassed all earlier attempts in both quality and quantity. Their collaboration with Bradford proved groundbreaking, providing him with a new tool to use as part of his expanded creative process. While Bradford was not a pioneer of photography, he was certainly an early proponent. He not only adapted to it, he developed with it.

Arctic Visions also emphasizes Bradford’s transition to lecturer later in his career, as he used magic lantern slides made primarily from negatives shot during the voyage. We now see that his adoption of this presentation mode began as early as July 7, 1870 in Phoenix Hall, given to the first regular meeting of the Fairhaven Union As­sociation for Christian Work. Fifteen years later, Bradford reached the pinnacle for authoritative lecturers by presenting his series of four Bradford Recitals to the American Geographical Society in New York City. The exhibit includes a narrated version of his first lecture “Life and Scenery in the Far North – Views from the Panther Voyage” as he presented it in 1885.

Arctic Regions describes Bradford’s journey more than 143 years ago. His words still give us a way to think about our world today, suggest­ing we pay attention, and savor each moment.

There are many individuals whose previous efforts built the foundation leading to this exhibition, none more significant than Emeritus Museum Director Richard Kugler. His scholarship, leadership, and collecting wisdom built the core of the Museum’s Bradford Collection.

With this announcement of our exhibition plan and related Arctic Regions republication, the Museum wishes to acknowledge Bruce A. and Karen E. Wilburn for their vision and generous support giving life to both these endeavors. 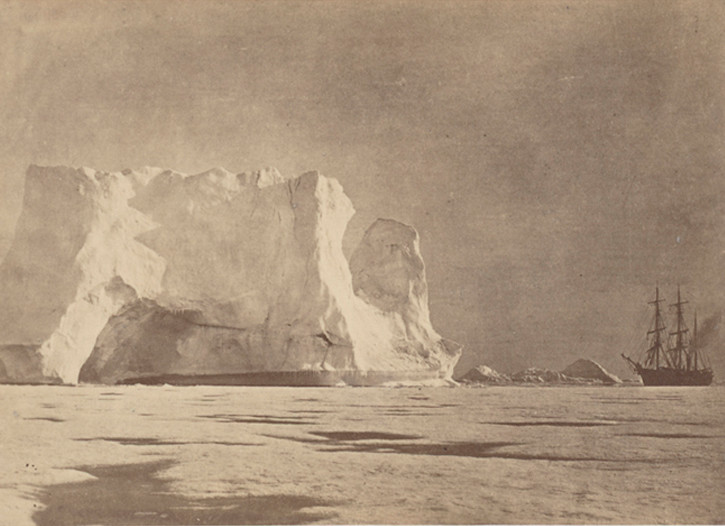 This archived blog was created by the New Bedford Whaling Museum to accompany the 2013-2014 exhibition titled Arctic Visions: “Away then Floats the Ice-Island”.